Our latest nowcasts for:

As previously explained the model in producing the estimate for 2018 Q1 does not include any data relating to activity in 2018 Q1 itself (the latest data that are included are those released during January 2018 and which relate to activity in December 2017). The nowcast produced next month will specifically incorporate information on activity in the first month (January 2018) of the first quarter of this year.

Having added the official outturn growth data for 2017 Q3 to the model, as well as adding the data released during January, our model has reduced its growth estimate for the end of 2017. While we will have to wait a couple of months for the initial outturn data for Q4 2017, the underlying soft and hard indicators for this period suggest that the economy remains weak. The Purchase Managers Index –for example- fell to 50 in November (with a value of 50 indicating no change in activity). A return to trend –or better- economic growth in Scotland seems some way off.

Taking the official estimates of economic growth in Scotland for the first three quarters of 2017 together with our latest nowcast for 2017 Q4 suggests that the Scottish economy grew at 1.1% in 2017. This is around half Scotland’s long-term trend economic growth rate, and lower than equivalent UK growth of 1.8% in 2017.

As we outlined when the Scottish GDP data for Q3 2017 were released, construction knocked around 0.2% off the overall change in Scottish GDP. Without the construction sector, Scottish GDP would have been 0.37% (exactly the value of our final nowcast for 2017 Q3). In producing their official GDP estimates the Scottish Government Statisticians rely upon one data series to capture activity in the construction sector (the ONS Output in the construction industry series). This isn’t a data source which we include in our model, one reason for this is that the data for 2017 Q3 in this series were released one week prior to the release of official GVA estimates. This makes it difficult to use these data to ‘nowcast’ GVA given their lack of timeliness (relative to the official release of GVA). Nevertheless, not having construction sector data in the model will mean that we are not capturing the effect of fluctuations in this part of the economy within our model.

One final point to note is that in all but one of the last six quarters, economic growth has been revised down between the initial release and the latest available data. Some of these revisions are substantial, see chart below. While revisions to GDP data are good practice and an important part of producing economic statistics, reflecting increased information about the performance of the economy, it is worth bearing in mind that with the exceptionally weak economic growth we are seeing in Scotland it wouldn’t take much of a revision to the latest data to see negative growth in one quarter. 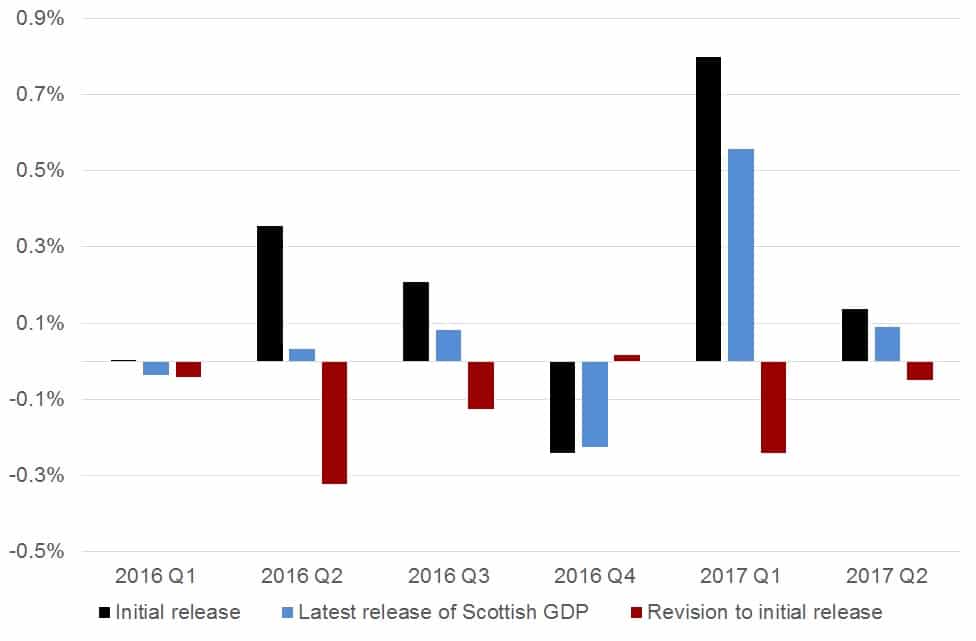